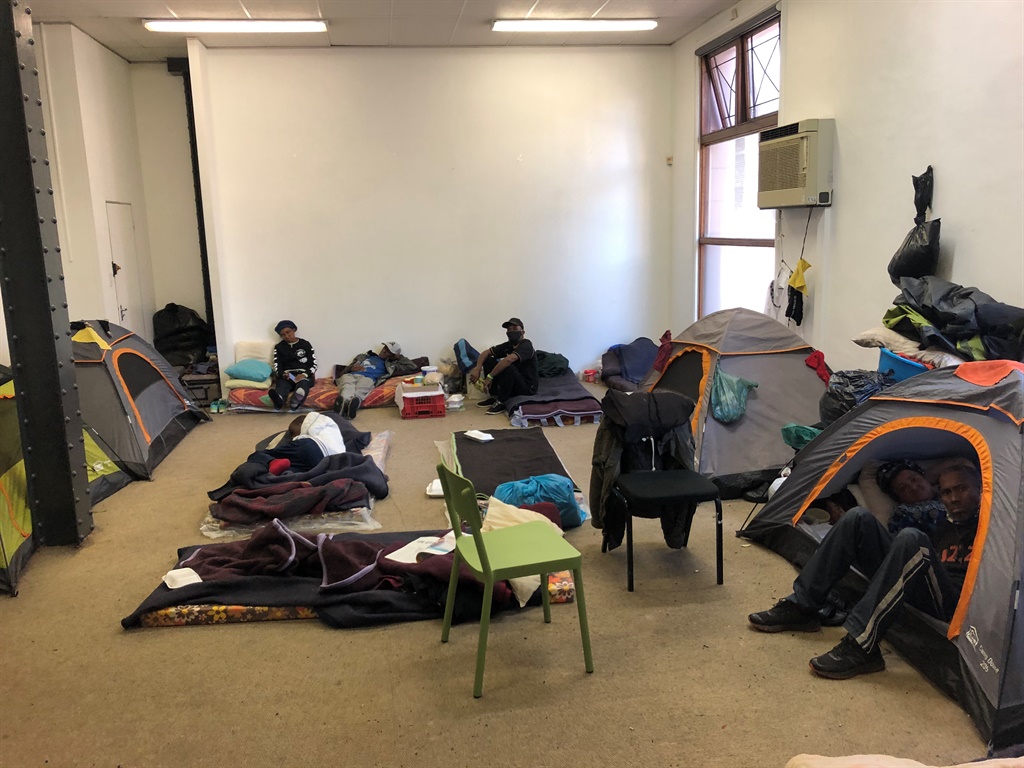 The Community Chest have availed their offices in Bree Street to a group of homeless people as shelter during the winter months. (Lucas Nowicki, GroundUp)

About 130 homeless people who were sleeping under the Culemborg bypass in Cape Town’s CBD have found temporary shelter at the offices of Community Chest in Bree Street, GroundUp reported.

In May, GroundUp reported that a group of about 180 people had been dropped off under the Culemborg bypass after the closure of City of Cape Town’s Strandfontein homeless shelter on 22 May. The group hoped that the Culemborg shelter would be open by now, but its completion has been delayed, according to the City.

Community Chest started providing meals for the group soon after they were dropped off from Strandfontein, said CEO Lorenzo Davids. He said that, when he saw weather reports of a strong storm which hit last month, he offered the group shelter until Culemborg opened.

“It was a last ditch effort to get them into a safe space,” said Davids.

Davids said their staff were working from home during lockdown, leaving the offices vacant. We were also told by the group’s representatives that 25 of the initial 155 occupants were no longer living at their offices.

GroundUp visited the three-floor office space last week. Most of the tables and chairs had been removed to make more space for people to set up camp. In the basement, a group of people were playing cards, while another group watched a movie on Netflix on another floor. Pre-made dinner was about to be distributed.

John Hufckie, one of the people staying in the office, said he was a fisherman before moving between shelters in the city centre at the beginning of this year. Hufckie said he was frustrated with how homeless people were being treated during the pandemic.

“We are not asking for permanent housing, all we want is a temporary safe shelter so we can have the opportunity to get a job,” he said.

Davids said that the current arrangement was meant to be short-term, but it’s been nearly a month since the Culemborg site was expected to open. He said they were in the process of organising a long-term arrangement for housing. He couldn’t give specific details yet.

Mayco Member for Community Services and Health Zahid Badroodien said that the Culemborg shelter was expected to be completed by 30 June. The shelter will only accept about 100 people.

Badroodien said that it would accommodate “individuals who have shown willingness to accept the offers of assistance that are made available to the City’s Street People’s Unit during their daily outreach activities”.

Meanwhile, three sites in the Northern Suburbs made hasty preparations to welcome 95 homeless people for three evenings, beginning on 9 June. The Cold Front Sleeping Site Initiative is a collaborative effort between MES, U-Turn and Streetscapes, which serve the city’s homeless community, local business, and religious institutions.

Braam Hanekom, a pastor at the Stellenberg Dutch Reformed Church for 25 years and director of the Centre for Public Witness, said he was approached by Ilse Maartens of MES, two days before the storm hit, to house homeless people.

The Church in Durbanville accommodated 50 people. And in Parow, a local businessman opened up a vacant room for 20 people. At the Bellville Presbyterian Church, 25 people were housed for three nights during the storm.

Each person was registered on entry and given a mattress. A small team of volunteers, led by a MES staff member, brought food and supervised the site overnight. Those sleeping at the site had their clothes sorted and dried while they slept.

Maartens said the idea of bringing food to people where they slept, rather than using queues, was born from experience. People running MES’s feeding programme found that queues often frustrated people and undermined social distancing protocols. They found that when people were given spots to rest – in their case they used the painted divisions in a car park – conflict disappeared.

Maartens said that other churches had expressed an interest in developing similar programmes, and encouraged those interested to contact MES, U-Turn or Streetscapes, as yet another cold front is anticipated to hit Cape Town this week.